One of the common fixtures in coral reefs are the sponges. These sponges (Porifera) are ancient immobile aquatic organisms, permanently attached to substrates like rocks and corals. Sponges are quite firm as they have a network of calcium carbonate or siliceous skeletal structure that creates their sturdy framework. Due to the high diversity of sponges, at least 5,000 species in existence and most of them occur in the ocean, they come in different shapes and sizes.

Though sponges are “simple” organisms with no organs, they do have specialised cells to carry out different functions. Some cells can be transformed to create gametes, and others can be made to transfer digested food throughout the entire sponge. So sponges are made up by individual cells with specific duties to carry out and can only live if all of these cells are in synergy and available to carry out their role - the epitome of teamwork! 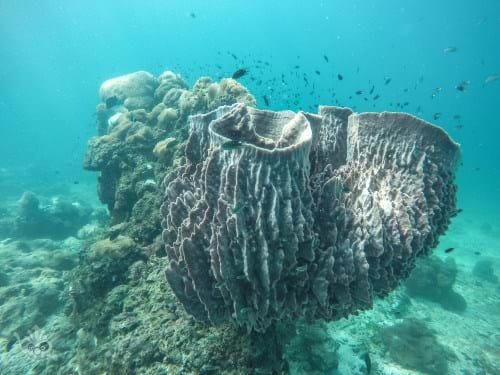 A couple of big barrel sponges fused together attached to a rock in Pulau Payar Marine Park. The three dimensional structure of these barrel sponges, like the hard corals, also provides shelter to many reef organisms. These sort of sponges can be seen in the Datai bay too.

Most sponges that are easily seen in coral reefs feed by filtering water for planktonic organisms like bacteria and microalgae. The constant filtering of water by specialised sponge cells with flagella also allows for respiration, exchanging gas as the water passes through the tiny holes on the body of the sponge. The water is then expelled from the sponge through a large opening, known as the osculum, acting like an exhaust pipe. Thankfully for us, there are many videos online to demonstrate the filtering ability and water movement through sponges.

These living sponges were historically harvested to make household sponges and now harvested for medical purposes for having antibiotic and antifungal properties, used originally by the sponges for feeding and killing of harmful microbes.