Coral reefs are called the rainforests of the ocean. They are habitats for the myriad of living organisms, holding up to 25% of the entire known dwellers of the marine world! This is made possible because of the three-dimensional structures formed by hard, reef-forming corals, originally made as an exoskeleton for protection.

The many nooks and crevices created by these structures are perfect homes for the many citizens of the coral reef. Like in our world, competition arises in a crowded area, especially among the beautiful fish of the coral reef ecosystem. Reef fish become territorial in crowded coral reefs, defending their space for the best feeding and resting grounds.

The anemonefish defends their own sea anemone home from being eaten by butterflyfish and other anemonefishes. Solitary adult groupers would chase away intruders of their own resting caves.

Despite the highly competitive environment in an underwater metropolitan, there are parts of the coral reef where hostility is absent. Some of these parts are called cleaning stations. This is where the reef fish congregate for a cleaning session by expert cleaners to rid of parasites and dead skin.

Cleaner wrasses are quite common in Indo-pacific coral reefs. To attract customers in order to feed, the cleaner wrasses do a certain “dance”. These tiny fish service their many “clients” by pecking on the bodies of the visiting reef fish. There are a couple of cleaning stations manned by individuals of Bluestreak cleaner wrasse (Labroides dimidiatus) in the coral reef in front of our Water Sports Pavilion, Redtail Butterflyfish (Chaetodon collare) being their most frequent customers. 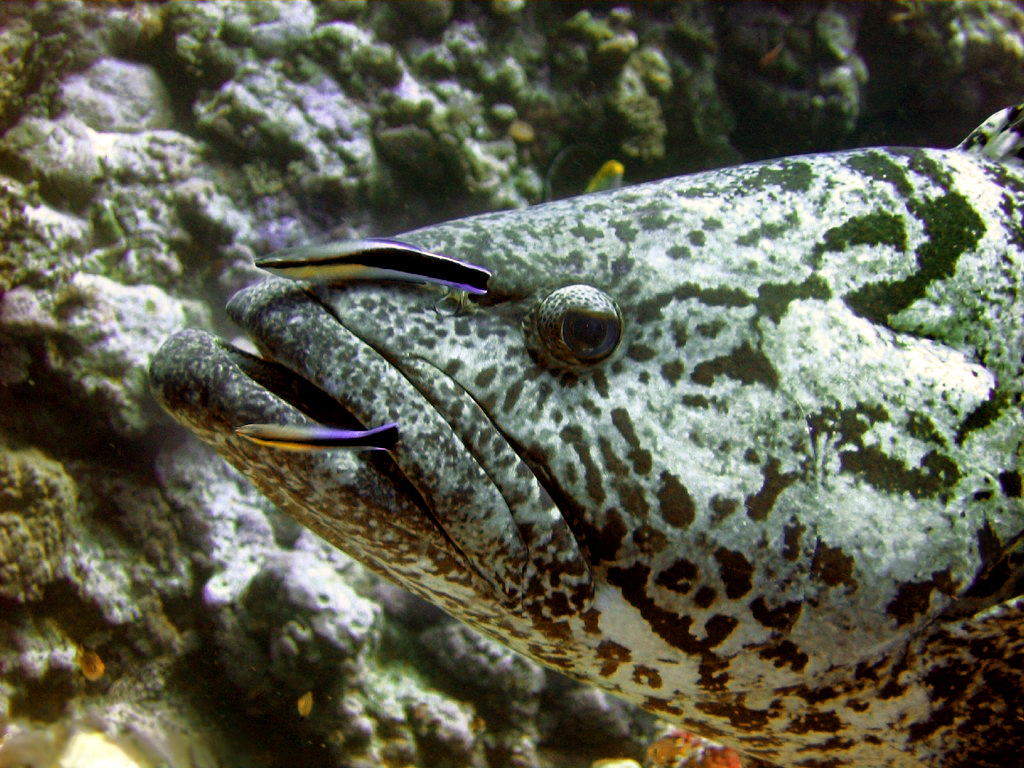 A school of Redtail Butterflyfish being serviced by a Bluestreak cleaner wrasse at a cleaning station in the coral reef close to shore at the Datai Bay.

Other cleaning stations may be run by cleaner shrimps. Cleaner shrimps also move side-to-side like a “rocking dance” to attract fish in need of a clean. The frequency of “rocking” increases when a cleaner shrimp is hungrier than ever.