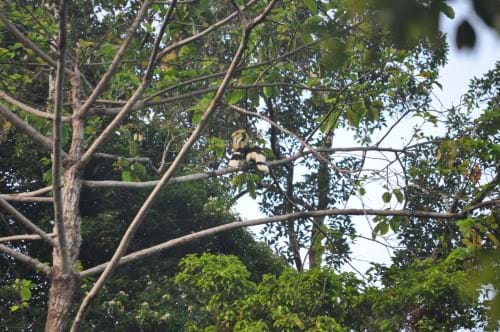 Hornbills are large and charismatic birds with a long bill that forms into a sizeable and mostly cavity filled ‘casque’. They make rather loud calls that are amplified by their casque. When the larger hornbills fly overhead they make a whooshing with each wing beat.

Their feathers form over their eyes just like eyelashes do on mammals. They are considered to be the farmers of the rainforest because of the wide range of fruit they consume then transport and later cast via droppings over wide distances.

They are mostly monogamous, caring partners, nest in cavities of trees and are excellent parents. The earliest fossil records show that hornbills were around from about 15 million years ago. They first evolved out of Africa with the African Ground hornbills being their closest living relative. Hornbills are confined to sub- Sahara Africa and parts of South and South East Asia. Hornbills live in forests, rainforests, or Savannah, depending on the species.

Hornbills are diurnal i.e. daylight active, often rising with the sun to preen and call to their neighbours before heading off to forage for food. Some species go off to forage in pairs or small groups while other species gather in flocks that may number in the hundreds. There are a total of 55 species recognized in the world with the greater majority i.e. 34 is found in Asia alone.

Although it is firmly believed that hornbills first evolved out of Africa it has been here in Asia where it seems to have evolved into that many more new species. Later when conditions were ideal some of these Asian hornbills were believed to have recolonized parts of Africa. In continental Southeast Asia, we have 13 species while in Malaysia there are 10 species of hornbills. Here in Langkawi, there are only 3 species, namely the Great Hornbill, Wreathed Hornbill and Oriental Pied Hornbill.

SUBSCRIBE TO OUR NEWSLETTER TO RECEIVE ALL OUR LATEST OFFERS

The Datai Langkawi is pleased to welcome guests to spend a regenerating island holiday at its rainforest resort. Find information on the exciting line-up for our The Chef Series - Malaysia for 2022 here.

We continue to adhere strictly to the government’s rules and regulations as well as recommendations by the World Health Organization. All of our team members are fully vaccinated. For more detailed information regarding our Health & Safety protocols, please click on the link below.