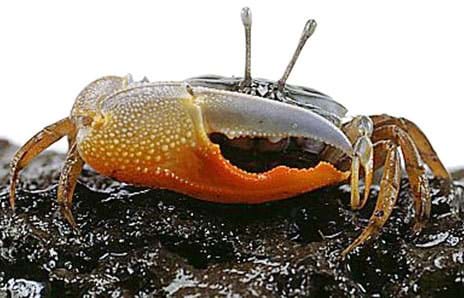 Fiddler Crabs are a very interesting creatures that get its name from their one substantially larger claw while the smaller claw is used in feeding itself. They are usually seen in great numbers especially at low tide. They are colourful and their colours differentiate the species. Some are predominantly blue, orange, red or green or a combination of several colours. The males are usually the colourful ones while the females are more mud in colour as she has to carry her valuable eggs and needed to therefore be camouflage. As for the males he needs to be colourful so he is stand out in the monotonous mud coloured environment and so can be easily seen by potential and receptive female.

They are busiest at low tide and observed digging, picking and eating and chasing other intruder fiddler  crabs. that breach their  little territorial space on the mudflats. As the tide rises and start to flood their muds flats they are seen to busily do a frantic waving action with their larger claw. This apparently is a courtship dance routine to attract the attention of any receptive female fiddlers to spend the high tide in his burrow.

Crabs like most insects moult their hard outer shell at each growth cycle. The males may occasionally loose their claws during fights but they regrow them at the next moult. For little creature they can live around 2.5 years to to 3 years. a little longer in captivity.